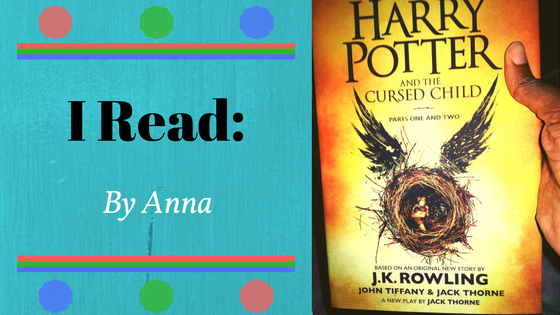 “Harry Potter and The Cursed Child”, is the first theater piece inspired from the “Harry Potter” series.

It is a beautiful collaboration between JK Rowling (Harry Potter’s mother), John Tiffany and Jack Thorne. The official rehearsal script has been published as a book, for the pleasure of all the “Harry Potter” lovers of the world, and I am one of them .

“Harry Potter” is described as the eight story, and  happens nineteen years after Harry Potter’s victory on the Dark Lord, Voldemort. Harry is now married to Ginny Weasley, and a father of three, James, Albus and Lily. He works for the Ministry of Magic and has a busy and quite initially happy life. One of the key other character of this story is Albus Severus Potter, 2nd son of Harry, and who seems to be very different from him.

The hurdles between Harry and his son Albus, will be the foundation for a wider story which once more will put the world at risk, risk of change, risk of war, otherwise this would not be a Harry Potter Story.

I read this 343 pages- book in a few hours only, and I was reminded why I had fell in love with the Harry Potter’s series in the first place. Harry Potter is considered as a hero but in reality, he is is just a man who did what he had to do in face of uncertainty and hurdles. Harry Potter is that scared child who gradually became a responsible adult, grew in front of our eyes, mastered his fears, transformed his limits/weaknesses into incredible strengths. It is the guy who understood how strong friendship, love and faith could transform your world.

I loved the Harry Potter’s series and I loved “Harry Potter and The Cursed Child”, because the fairy tales are true. Hogwarts is not this magic school, it is first and foremost a vision of our world, with its different sides, its different religions, human communities and their abilities to destroy or unite, to fight together or to hate each other, most of the times with no valid point of view. I loved “Harry Potter and The Cursed Child”, just like the other books of the Harry Potter’s series because I learned a life lesson. In this specific book, I learned that being a parent is everything but a straight road. I learned that is critical to hear your child, not to hear yourself. Indeed, your child is always your reflection but he is not you. Being different of you makes him even more interesting of a human being to discover. The greatest challenge of education therefore is really to live the space for that different human being to grow by himself without fearing of being accepted for what he is. I loved “Harry Potter and The Cursed  Child” because it stayed true to the series: funny, easily understandable, made for all ages, realistic, full of adventure.

I highly recommend the reading, especially as this book has an additional feature, it is a play and it is written as such. It makes it faster and funnier to read. Well done to the team. JK Rowling did it again.

As for you dear reader, did you read the book? What are your thoughts? The Comment space is yours. Share your voice.

Anne Kedi Siade believes you can achieve everything you want in life, along as you have the passion for it. Fueled with energy, she loves Africa (the motherland), litterature, music, Writing, dancing (pretty much) and has jumped into new professional challenges which enchante her (family, business and entrepreneurship) "La Bibliothèque Qui Ne Brûle Pas" was launched as a life-time project which aims in getting Africans all around the world empowered by a better knowledge of their litterature, their music and their history. The blog is the first step of this adventure and is the basic she aims in getting right for now. La Case d'Anna is a path to discovering more of herself and sharing it with the world. It is a space for conversation and discovery with others and she hopes you will appreciate the tone and freedom of speech. She dearly invites you to discover those two spaces if you haven't yet and will be deeply honored by your follows, comments and shares!! PS: It's the marketer in her speaking at the 3rd person, some creative idea to get to her point. And this is when you should be saying "Ahah"!! View all posts by Anna S. Kedi